Disclosure: This shop is part of a social shopper marketing insight campaign with Pollinate Media Group® and Playtex, but all my opinions are my own. #pmedia #RefreshYourNursery http://my-disclosur.es/OBsstV 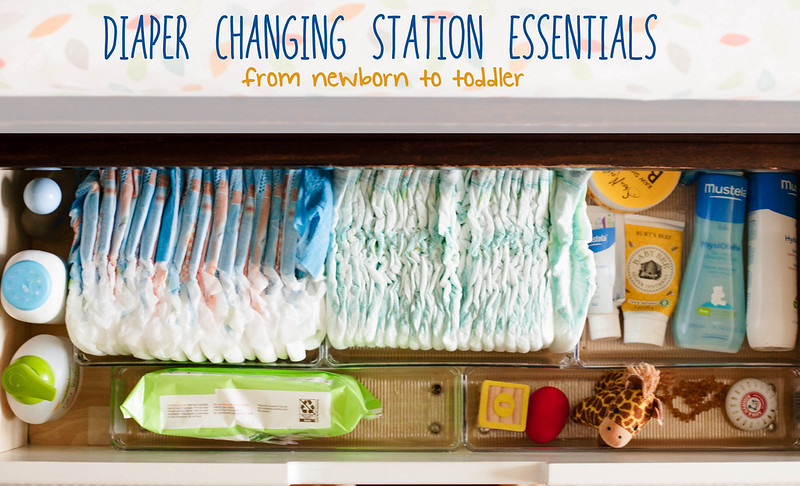 I remember when I was first setting up the nursery for Dylan back in the day, I had no idea what to do for a diaper changing station.  Now that it’s been a couple years, we’ve got the diaper changing station setup down pat!  Our diapering has changed from cloth diapers to pullups and disposables now that we’re in the middle of potty training, but the essential necessities still remain the same.  I thought I’d share a quick run-down of how I set up our changing station to make diaper changes as quick, safe, and easy as possible!

Before I get into products, let’s chat briefly about setup as it’s just as important to have everything close and readily accessible.  I have the changing station set up near the corner of Dylan’s room and it’s perfect not only because it’s out of the way, but also because I have access to a separate wall where I keep a few books and toys handy to help Dylan entertain himself as necessary.  The dresser that I chose has a removable changing area addition included.  I love the seamless look and the fact that the pad won’t be shifting around on my while I’m trying to wrangle my toddler in and out of his diaper.  I keep everything that I need for diaper changes localized to this area and the best part is that almost all of the diapering essentials are also tucked out of sight in the dresser, making for a much less cluttered appearance on the outside! 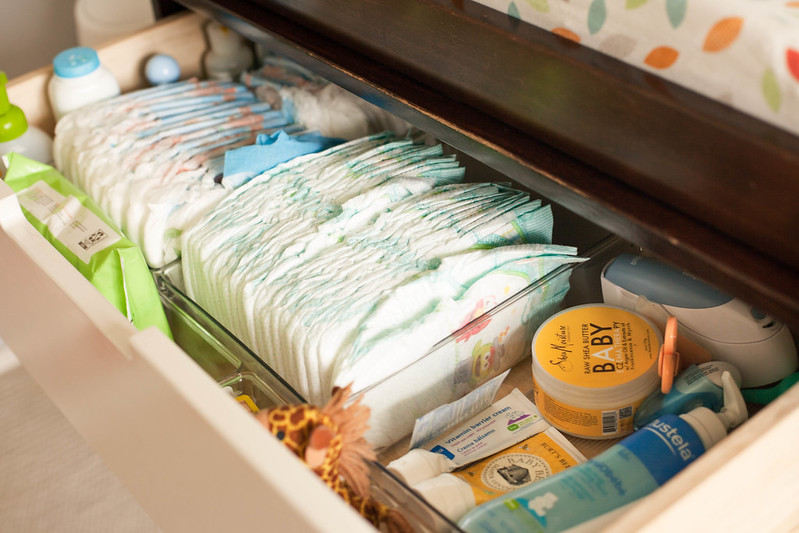 I’m a bit quirky and love seeing a neatly organized drawer!  The secret ultimately having the right organizers as it really helps separate and compartmentalize everything into their own spot.  I used a combination of these storage bins and these deep drawer organizers and it all just fit together like a little Tetris puzzle!  🙂 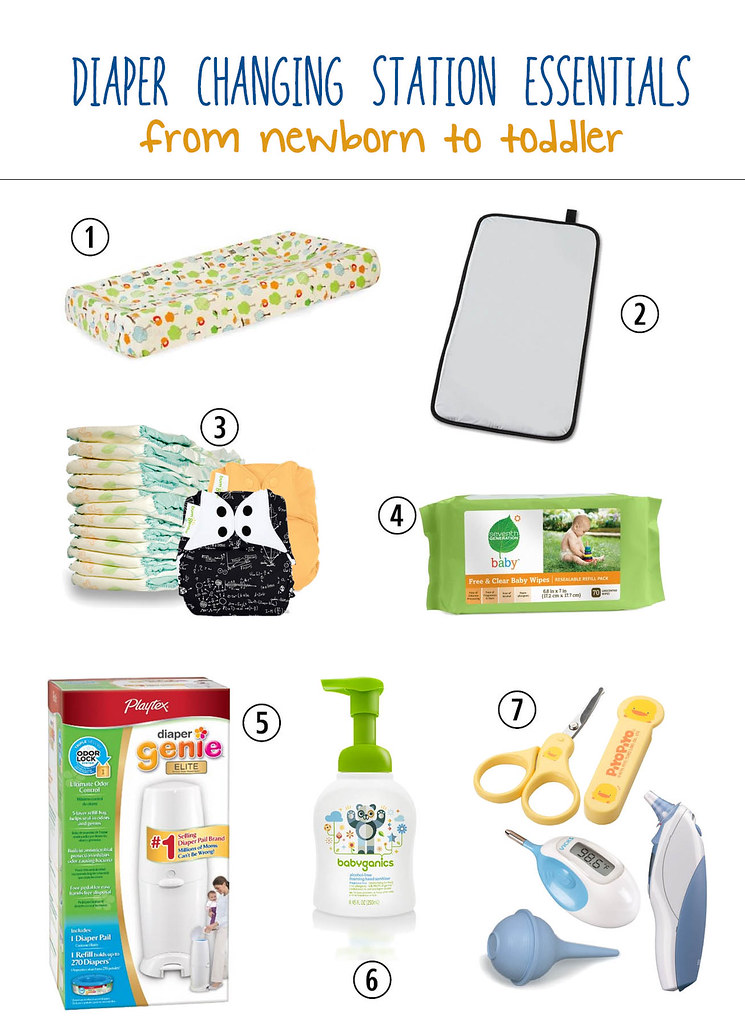 And now, for a breakdown of my diaper changing station essentials:

1.  Changing Pad (+ Optional Pad Cover):  Having a changing pad is so useful for keeping a squirmy baby to an active toddler nestled properly in front of you so that you can actually change the diaper.  I found that if I ever chose to change Dylan on the floor, he would just immediately roll over and it would be nearly impossible to get a diaper on and off his busy body.  This contoured shape really helps to keep him in place and makes everything go smoother!  The pad cover is optional, but I just didn’t like the look of a naked changing pad so I bought one that coordinated with Dylan’s crib sheets.

2.  Waterproof Changing Pad:  Having a waterproof pad to use alongside messy diaper changes is absolutely critical!  Even if you decide to skip the pad cover on the changing pad, I would still recommend that you go for a changing pad as we’ve had a number of messy poop blowouts and it’s just so much easier to take a pad over to the sink instead of a giant changing pad.

3.  Diapers:  Obviously.  Definitely have a stash of diapers within easy reach at your diaper station, whether it be a cloth diaper (which we did for the first 18 months) or a disposable diaper (which we’re using now for potty training and overnight).

4.  Wipes:  Another obvious essential.  When we were going cloth, I stocked up on a couple packs of these.  As for disposable, these Seventh Generation ones are my fave.  I usually look for ones that are strong and have just enough “grip” to take care of messes with a minimal number of swipes yet are still soft enough for Dylan’s skin.

ALSO READ:   Comparing 5 Meal Delivery Kits -- Which Is The Best?

5.  Diaper Pail:  I love my Diaper Genie.  It’s so easy to open the lid with my foot and I can drop the dirty diaper in the pail single-handedly without having any issues with the mess getting on me.  I’ve never had any issues with odor as the internal clasp seals it all in.  Emptying the Diaper Genie is also super easy as there’s a built-in cutter and all I have to do it just tie it off.  Couldn’t be easier!

6.  Hand Sanitizer:  You’ll wanna get good pump of this stuff after cleaning up down there.  You don’t really have the chance to run and wash your hands when your baby is still on the changing table so having a little both of hand sanitizer conveniently available is critical!

7.  First Aid Kit:  I also have a few other items I keep handy in the changing table.  First off, I can’t recommend this nail clipper enough!  I was so scared to cut Dylan’s nails as a newborn but these little scissors made it remarkably easy (no accidents so far, knock on wood!).  And then of course, you’ll want a set of thermometers in case there’s ever a fever.  I hate doing the rectal temperature but it’s the one that doctor’s will always request, so I keep both on hand.  And last but not least, a nasal aspirator.  In his first year, Dylan had many cases where he was stuffed up and these bulbs were the only ones that worked.

Optional:  Diaper Cream, Lotions:  Dylan also had a few episodes as a newborn when he had a minor diaper rash and we needed a good diaper cream.  I wanted to find something that was all natural and chemical free.  I ended up really loving this one and this one — his rash would clear up instantly in a day or so!  As for lotions, I also stock up on this one from Shea Moisture that’s free of any nasties and smells absolutely delicious! 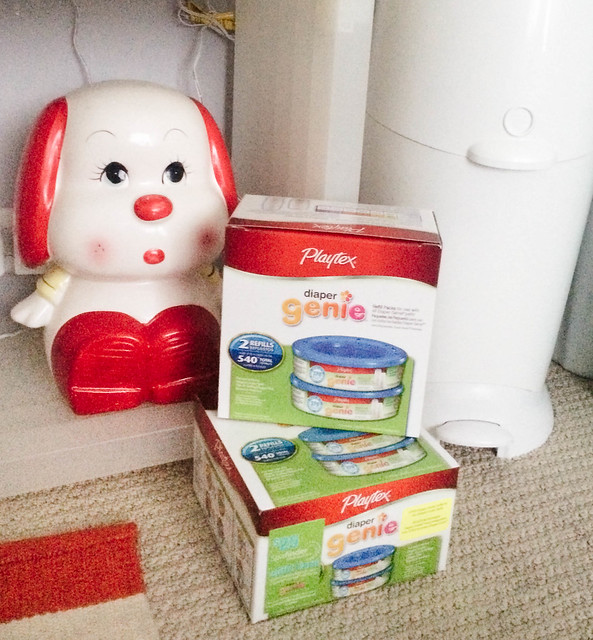 And, for any of you that already own a Diaper Genie or are considering purchasing one, there’s actually an amazing promotion going on right now for a $25 Spa Finder Wellness gift card whenever you buy any 3 varieties of Diaper Genie refills from Target.  Just save your receipt and go to this website to redeem.  The promotion is going until July 31, 2014 but it’s only available while supplies last!  I’ve already downloaded my gift card and have a spa pedicure waiting for me.  🙂

Thanks so much and I hope this post was useful for you! Don’t Forget the Card! // Exciting Preparations for Dylan’s 2nd Birthday
Disclosure: I am a member of the Collective Bias® Social…