Hi everyone!  I hope you’re having a good weekend so far.  Dylan just went down for his morning nap and I feel like I need to do some catching up with everyone on the blog.
Since before my blogging break nearly 1.5 years ago, I was early in my pregnancy at 13 weeks and had just found out that I had a subchorionic hemorrhage (SCH) — a fancy word to basically mean that I had bleeding in my uterus.  I wanted to tell my story of how my pregnancy progressed with my hemorrhage in the hopes that someone else in a similar situation might read my story and find hope.
From the very moment that I started bleeding, my pregnancy was instantly considered “high-risk”.  I was warned that I was in danger of pre-term labor, something that left me shaken and helpless at the same time.  Although many SCH cases do resolve themselves as the pregnancy progresses, my doctor suggested that I should just take it easy and stick to as much bedrest as possible.
I spent lots of time after that googling subchorionic hemorrhages and reading support forums online.  Not a lot of people knew I was pregnant at the time so it was a scary secret I felt like I was holding inside.  I was scheduled to go see a perinatalogist that specialized in high-risk pregnancies every 2 weeks, where they would be using an ultra high-resolution ultrasound to check for any progress on my hemorrhaging and to make sure that the baby was doing ok. 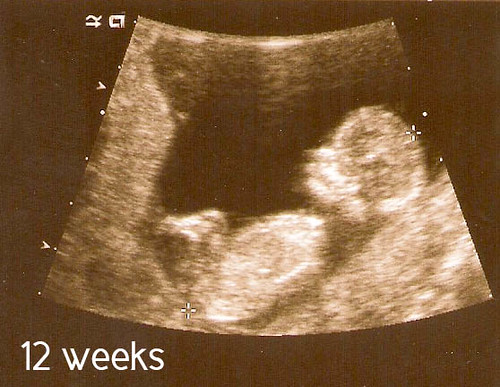 I vividly remember those first few perinatologist appointments.  My first one was just a week after the bleeding first started; I would be 14 weeks.  I had barely a bump at the time so sometimes it would the whole pregnancy thing didn’t seem real.  It was only after seeing the little hands and feet moving on the ultrasound monitor that it really hit me that I was growing this person — a real human being inside me. 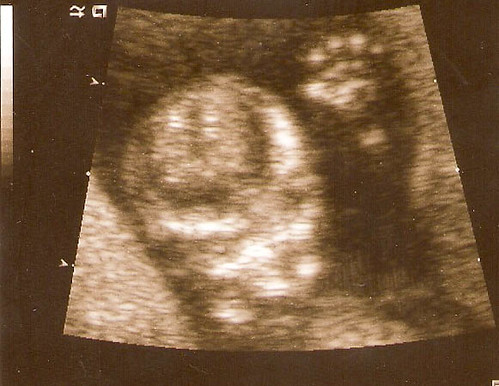 I remember the perinatologist taking measurements of the hemorrhage (2.4 cm by 4 cm) and while looking around, suddenly asked if we wanted to find out the gender of our baby.  Adrian and I looked at each other and both said yes.  It was right then that we found out we were having a little boy.
Adrian and I couldn’t have been more excited!  I wanted to start planning a nursery and my nesting instincts were kicking in.  But, knowing that I was high-risk, I had to temper my feelings and not set myself up for disappointment.  Oh my goodness was this HARD.
I continued to have light bleeding every day.  Later sonograms would show that my hemorrhage was actually growing as my belly grew.  Then, somehow at 23 weeks, the bleeding stopped.
Dylan was also starting to get big by this time, so it became difficult to get a clear view of my hemorrhage via ultrasound.
By the time my labor started, I was right on the cusp of hitting 39 weeks.  Throughout the entire pregnancy, not a day went by where I wasn’t grateful that I didn’t go into pre-term labor.  To know that I had reached full term and then some was one of the biggest reliefs of my pregnancy.
Thinking back to this turn of events in my first pregnancy is still a bit emotional for me.  Even 1.5 years later the memories still seem fresh and I remember my fear of losing this precious little person.  Every time I look at Dylan now, part of me is reminded that he is my little miracle baby. 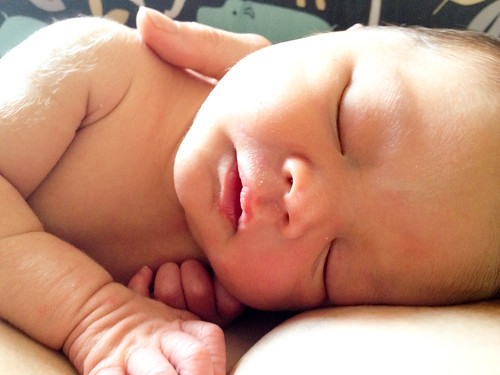 Thank you so much for your support throughout this time.  I appreciate every one of you for still being there for me and welcoming me back to the blogging world.

ALSO READ:   Miko 3 Review: My Honest Thoughts on the AI Robot for Kids
« Happy Weekend!
An Afternoon In The Park »

Shop Over the Knee Boots, Quarter-Zip Sweatshirts, Pants, Platforms and more. Get this widget.