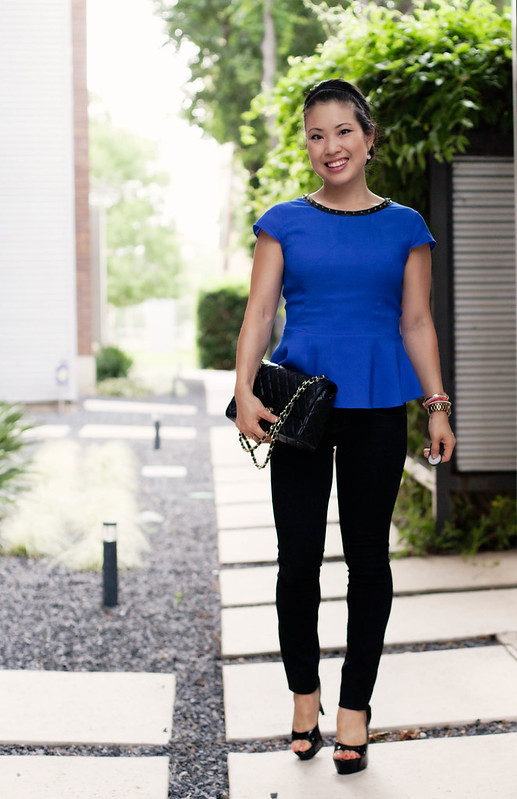 Top: Express Studded Zip Back Peplum Top (similar)
Jeans:  J. Brand 10″ Skinny Jeans via Gilt (buy)
Shoes: Jessica Simpson Astor Slingbacks (similar)
Watch: Michael Kors “Small Runway” MK5430 (buy)
Purse: Chanel replica m/l flap (similar)
I know the subject of daycare versus in-home care can be controversial so please don’t take this post the wrong way.  Ultimately it comes down to a decision that is right for your family; this is simply a post explaining the process Adrian and I went through to find our childcare solution.
I went back to work 3 months after Dylan was born.  I wasn’t sure how I would feel leaving my baby all day long, but I think what we have now is working for all of us.
After I first found out that I was pregnant, I started looking into neighborhood daycares.  I asked for recommendations from friends with babies and read through reviews that I could find online.  Adrian and I went on a daycare tours and spoke with more people about their daycare experiences.  We were a bit worried after hearing about how easy it was not only for babies to get sick in daycare, but also parents to get sick as well, thus making for an extra tough first year.  Adrian and I actually weren’t very impressed with the daycares we visited and at this point I decided to put the notion of childcare on the back burner.  I knew that daycare wasn’t going to be in the cards for us (at least not in the immediate future) and luckily my parents lived about 30 minutes away and could take care of Dylan here and there until I found a more permanent solution.
I decided to wait on starting the nanny search until after Dylan was born.  I knew that a lot my decision would be based simply on comfortable I felt seeing the nanny with Dylan.
ALSO READ:   Destin-Fort Walton Beach, Florida Travel Guide:: Tips for Affordable Family Beach Fun
About a month after Dylan was born, I decided to start up the nanny search.  We started with basic word-of-mouth referrals and searching through the local Chinese newspaper.  My original goals were to find a nanny that could speak Chinese (it’s my native language) so that Dylan could pick it up even when I was away at work.  Unfortunately the Chinese-speaking nannies we found did not have any nannying experience beyond taking care of children in their family (and none with any newborn experience).  They also had limitations such as being unable to have reliable transportation and short working hours.  In the end, I realized that I was going to need to expand my nanny requirements a bit.
I ended up getting a membership at a few online nanny agencies (SitterCity, eNannySource, and care.com) and posted an ad looking for a bilingual nanny who had newborn experience as well as a child development education background.  And just for my own peace of mind, I also wanted someone who was a bit older (30+).  I reached out to a few prospective people that I found, but ended up getting contacted by a nanny who found my ad on SitterCity.  Her resume and references were impeccable, so I set up an interview for that afternoon.
I couldn’t have been more impressed with our nanny.  She arrived exactly on time and came in bounding with energy and happiness.  I immediately felt at home with this nanny.  At the time, I remember that Dylan had gas and was fussier than normal.  I had been bouncing Dylan in my lap while we were talking but when I offered to let her hold Dylan, she quickly realized that he was gassy and helped pump his legs into his stomach for relief.  I saw how calm Dylan suddenly became and at that moment my heart was sold.  If ever there was a real-life Mary Poppins, this person was it!
I spent the next few days following up on her references and everything just confirmed for me that this was the person I wanted taking care of Dylan.  Unfortunately finances were another matter.  Without delving into details, Adrian and I basically realized that we were really going to have to cut back on our spending if we were to hire this person.  We questioned whether we were making the right decision, but in the end I knew that this was the only way I could successfully go back to work and not worry about how my Dylan the entire time.  After a few rounds of negotiation, we finally settled it out.  This was probably one of the most relieving days of those first few months after Dylan was born just knowing that I had found someone to take good care of him when I returned back to work.
As the days of my maternity leave neared its end, I decided to make my final week before returning to work a transition week for all of us.  I arranged to have the nanny come to our house that week just so I could be there to see how everything went, show her where to find things in the house, and just to get to know this person who would be spending so much time with my son.  During that week, I was so impressed with how she handled Dylan.  I remember her showing me tricks on how to get Dylan to stay on his tummy longer during tummy time, tricks on how to get Dylan to nap in his crib during the day (I’ll admit that I was using the swing more than I should have), and even tricks on how to stretch out his naps from 30 minutes to a full 1.5 – 2 hours!  I felt confident going back to work and leaving Dylan in excellent care.

ALSO READ:   Destin-Fort Walton Beach, Florida Travel Guide:: Tips for Affordable Family Beach Fun
Our amazing nanny
While I’m away at work, our nanny also uses the Baby Connect iphone app to keep my posted on Dylan’s daily activities.  I get updates in real-time so I can see details like how his naps are going and even what he’s eating for lunch / snacks.  The app also comes in handy for seeing trends in nursing / sleeping habits as well as keeping track of his milestones! Finding good childcare can be difficult and the decision for moms can be especially hard.  In the end, I’m glad that I made the decision to go back to work.  I truly enjoy my job and even though the time away from Dylan is hard, it makes me cherish those moments that I have with him so much more. 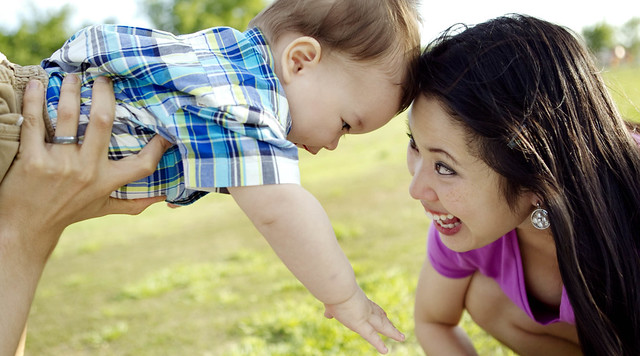